Although the vegan diet in India is still a marginal phenomenon, the country with its diverse cuisine is a true paradise for vegans. Many dishes are completely vegan, such as the coconut curries in Kerala or the delicious Daals in all their variations. With a few tips and tricks, it is also very easy to get vegan dishes in India. The selection of vegetable curries is huge and there are vegetarian restaurants everywhere. The meals are usually freshly prepared daily and contain ingredients that are sourced from local markets. You can also buy fresh fruits, vegetables and other snacks such as nuts on the streets, which will make your vegan heart beat faster.

If you are traveling in India, there are still a few things that you should pay attention to when eating a vegan diet. While the vegetarian variant with a share of 40 percent vegetarians is not a problem in the country, the Indian population consumes and produces many dairy products, which are consequently found in many dishes. The trick is to know the Indian dishes and animal products and to be able to ask about them. As soon as you can do this, nothing stands in the way of vegan food in India! 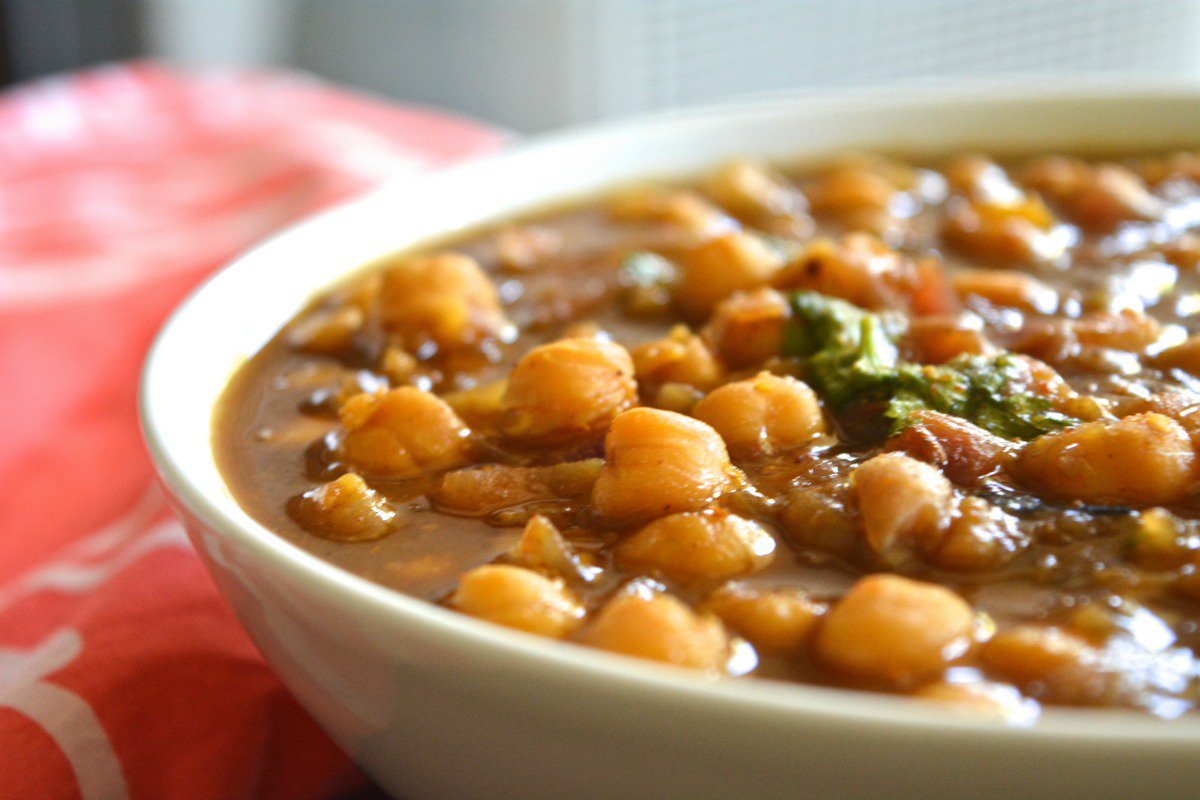 Punjabi Chana Masala or Chole is a vegan dish made with chickpeas.

When following a vegan diet in India, the main hurdle comes with an ingredient known as ghee. Ghee is clarified butter and is an integral part of the cuisine in many parts of India, especially northern India. In regions like Rajasthan, for example, where it is up to 45 degrees hot in summer and water becomes a golden commodity, food is generally cooked in ghee. Ghee is widely considered to be very healthy and is also the main ingredient in candy, cakes, cookies and much more. It is often found on side dishes such as flatbread. As you can see, Ghee is very widespread in India and it can therefore also happen that it appears in supposedly vegan dishes, even if only as a side dish.

Although more meat and fish are generally consumed in the south than in the north, the South Indian cuisine tends to contain less dairy products, as the population here uses coconut oil instead of ghee or other oils. Therefore, most of the vegetarian dishes here are also vegan. Usually the menu will state whether a dish contains animal products, but you can always ask to be on the safe side. If a dish contains dairy products or ghee, it is usually no problem at all to ask to cook it without animal products.

Milk is also India's largest agricultural product and India is one of the leading milk producers in the world. Interestingly, however, there are entire regions, especially in East India, where many people are lactose intolerant. However, after being converted into ghee, the milk tends to be easier to digest, so that many people who do not tolerate dairy products well still eat them. Lactose intolerants often eat meat, eggs and fish as a protein substitute.

Another product that you will find especially in northern India is paneer. Paneer is a soft cottage cheese made from cow's milk, which is used in many Indian dishes. Even if it's not nearly as common as ghee, it's still good to know what paneer is so that you can avoid it. 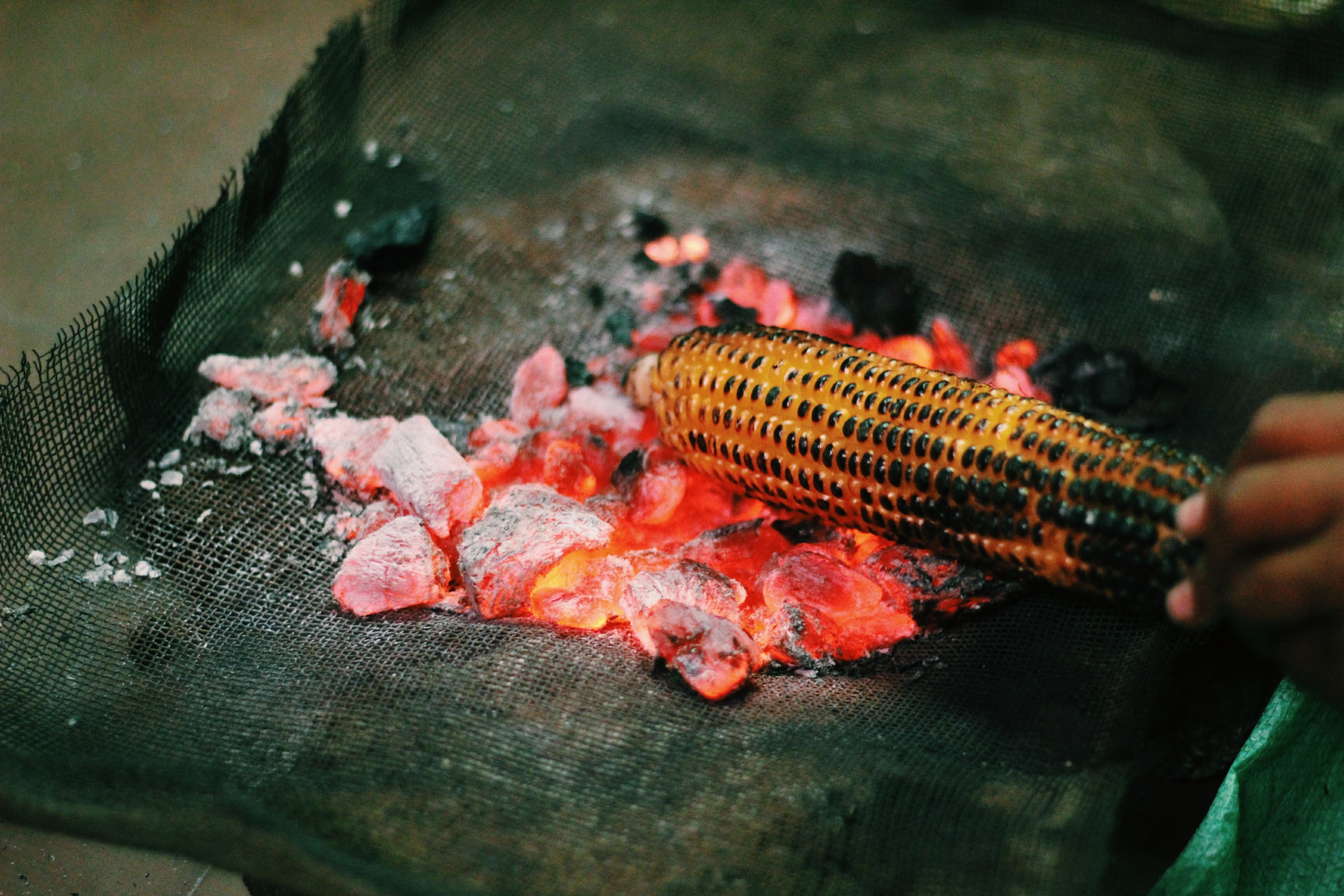 You can find vegan street food in India without any problems! 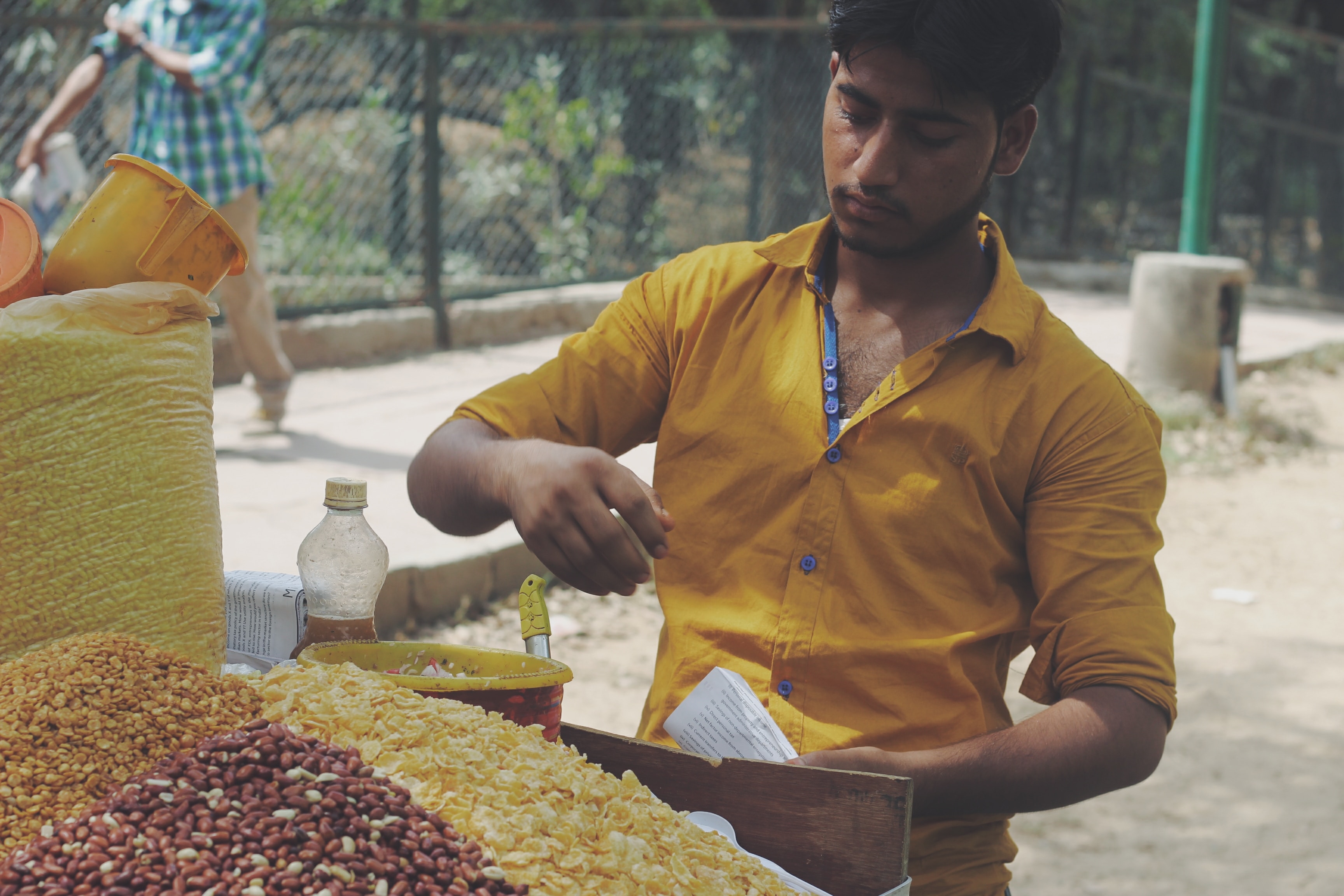 Nuts and other vegetarian snacks.

Often, being vegetarian is the first step towards vegan food. For religious reasons, India is home to most of the world's vegetarians. In fact, around 40% of the Indian population are vegetarians, that is around 506,960,000 people. Of these, around 31% are “pure vegetarians”, i.e. they also do not consume eggs. All over India you will find restaurants that describe themselves as either “vegetarian” (no meat or fish), “purely vegetarian” (no meat, fish or eggs) or “non-vegetarian”. These labels can be very helpful, but of course “purely vegetarian” does not mean vegan, many dishes can still contain animal products such as dairy products. Pre-packaged food is also required to have a label. A green point indicates that it is vegetarian (also without egg) and a brown or red point does not indicate vegetarian (therefore you will sometimes find a red point on cakes or biscuits, not because they contain meat, but egg)

Red does not indicate vegetarian and green indicates vegetarian.

Tips and tricks for vegan food in India

Given the popularity of vegetarian cuisine in India, finding vegan options shouldn't be a problem. Often times, small changes are necessary that you can simply ask for. As the ultimate insider tip, we recommend that you do not ask directly about vegan food, as it is often not understood what it is exactly. It is best to say that you are a vegetarian and do not eat dairy products. It also helps to list common dairy products like milk, ghee, butter, curd, paneer and cream and to gesture that you don't want them.

Another advantage in India is that street food is prepared right in front of your nose. So you can see immediately if an unwanted ingredient is added. If you are looking for vegan restaurants, the HappyCow website will help you and you can filter for vegan food on the Zomato food app. These apps and sites mostly only work in the larger cities of India.

Of course, you also have the option of cooking yourself on your trip, but this is not possible in all accommodations.

Finally, some useful links for you: 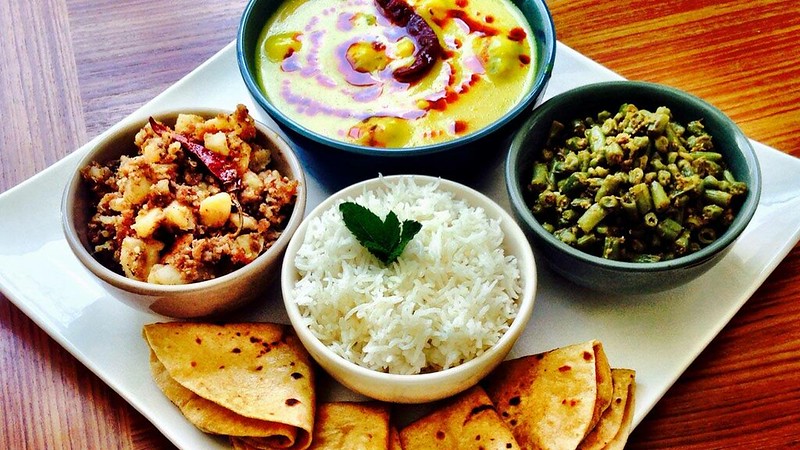 The diverse cuisine of India.

So as you can see, vegan food in India is not that difficult! Try it out, after a while you will notice which explanation of “vegan” most restaurants or street food stands understand best. The concept of “vegan” is usually not very clear. Try “vegetarian without animal products”. If you find a better formula that you can handle, let us know 🙂

One more thing: Jain Food is not necessarily vegan. However, this is a well-known concept in India and is shown on many menus. Jains don't eat anything that harms animals. So you eat purely vegetarian and also forego products that come from the ground (potatoes, garlic, onions, etc.), as small microorganisms are killed during harvest. Yet they drink milk. 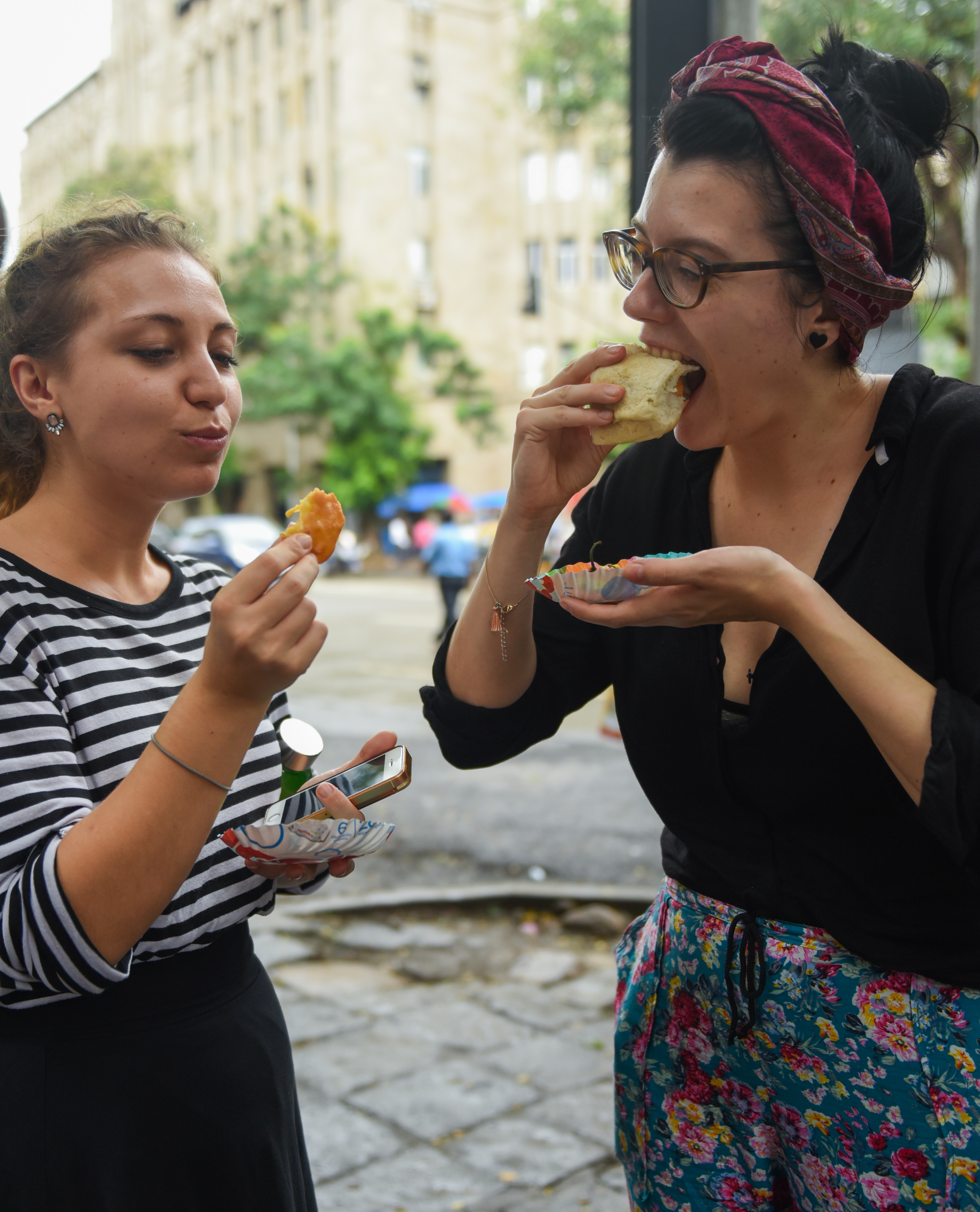 If you've got the urge to travel or if I have any further questions about vegan food in India, don't hesitate to contact us!

Book your trip with us now!