Salsa is a Latin American dance

Latin American dance is in the world dance program next to Standard dances a division to which the samba, the rumba, the Cha-Cha-Cha as well as the Jive and the Paso Doble belong. Although only the first three really come from South America, these five dances are grouped under the term Latin, as they are very similar in terms of the technical elements. Jive originated in North America while the Paso Doble originated in Spain and France. The main differences from the standard dances (Slow waltz, Viennese waltz, Foxtrot, Quickstep, Slowfox and tango, which incidentally also comes from South America) consists in the communication of the couples - the two bodies separate more often, you not only dance as a unit, the coordinated figures become more visible and there are far more twists and turns.

Fashion or ballroom dances like that Salsa, the Bachata, the Cumbia and the Merengue do not belong to the collective term ofLatin danceseven though they were invented in Latin America. While in Europe the so-calledInternational style (See above for dances) has prevailed at tournaments, in the USA you dance alongside the rumba and the cha cha den bolero from Spain, the East Coast Swing as well as those also coming from South Americamambo (instead of Samba, Jive and Paso Doble).

Despite these different affiliations, we now take a look at all the important dances that really come from South and Central America, regardless of whether they are danced in tournaments or not.

The samba has its origins in dance forms that slaves in the 19th century from countries like that Sudan, the Congo and Angola to Brazil brought. The basis was always an African drum rhythm. Through many influences, such as from another dance, the dem Tango Argentino similar Maxixes, today's samba arose, which is not only an integral part of the world dance program, but also the most important form of expression of the Brazilian through its provocative and exuberant nature carnival. Especially in Rio de Janeiro a competition between the city's samba dance schools has established itself at carnival time.

The mambo originated from the Cuban style of musicSon Cubano and the Cuban dance Danzónwho, in turn, is based on a French dance (Contredanse) based. Especially the musician Perez Prado shaped this dance style by combining his songs with a new one rhythm equipped. Since this rhythm and the sequence of steps are considered to be somewhat complicated, the mambo has not established itself very well up to the present day, but has been replaced by the simpler ones Cha-Cha-Cha and rumba repressed. It peaked in popularity in the mid-1950s in New York and Europe. 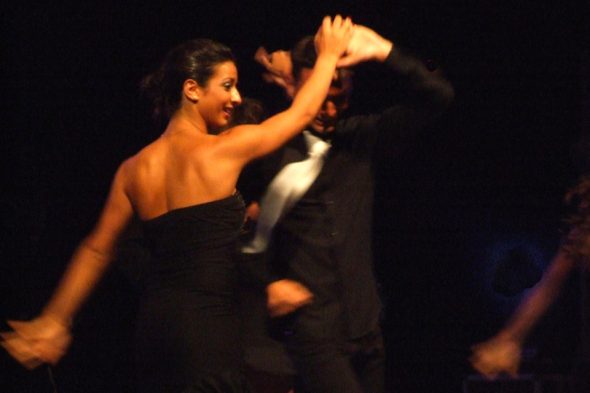 The origin of this Cuban couple dance lies in the Habanera, one on Cuba style danced mainly by Afro-Cubans in the early 19th century. This then influenced other dances like that Milonga (a subspecies of tango) and the bolero. This resulted in slight changes and slowing down of the music rumbawhich has since been forgotten, but before and after the Second World War, experienced a renewed boom, especially in New York, and has since been part of the world dance program to this day. Particularly characteristic of the rumba is the flirting of the couple, who turn away from each other every now and then and want to be conquered by their partner through loving, erotic and dreamy dance sequences. By telling this story, the audience is often drawn in.

The is also influenced by other dances Cha-Cha-Cha in the years 1948 to 1955 also in Cuba originated. The mambo applies from the origin of Cha-Cha-Cha, only by removing the syncopation in the beats and the introduction of the typical Cha-Cha-Cha-rhythm one created this new way of dancing. This was then further based on technical achievements rumba adjusted so that in the end a cheerful mixed dance came out, in which the couple cheekily plays with each other.

The Irish playwright Bernard Shaw once said "Tango is the vertical expression of a horizontal desire." - this perfectly describes the sizzling eroticism of a dancing tango couple. The result is that Tango Argentino over a long period of time, due to the many influences of immigrants from different countries in the 19th century. The creole candombe (Dance moves of African slaves), theHabanero out Cuba, thepolka out Bohemia and the German musical instrument bandoneon, later a symbol of the tango, contributed to its creation.

Similar to the accompanying music, salsa combines Afro-Caribbean and European dance styles. As with mambo they have their origins in French-EnglishContredanse 17th century. The French and Spanish colonial rulers brought their guitar music to Hispaniola (today's Haiti and Dominican Republic). When the locals rebelled against the French and they followed suit Cuba fled, it was mainly the dances of the French that mixed with the guitar music of the Spaniards, as well as the African drum music. Other dances and musical styles combined to form a sauce ("Salsa"), from which the modern Salsa emerged in the end (once again in New York, among other places).

Where did the Merengue exactly originates is controversial. Since the middle of the 19th century, the simple dance was mainly danced at village festivals in the rural population. In the 1930s, the then dictator discovered the Dominican Republic, Rafael Trujillo, the merengue for his purposes as a propaganda medium, organized dance festivals and had the merengue music instrumentalized more complex and played on the radio. This promotion paid off not only for him, but also for the common people. Even after his death, people were still busy dancing and the merengue became a cultural asset of the republic. Since then, the Dominicans have identified themselves with the merengue, which is indispensable there even today.

At the beginning of the 60s they played in the Dominican Republic with pleasure Guitar music for couples in love who are interested in Mariachi music in Mexico remembered. With an increasingly brisk rhythm and influences from merengue music, the beat accelerated and people began to bolero-Dancing elements to the music. The became particularly popular Bachata first time at times Juan Luis Guerras album "Bachata Rosa"; previously the dance was considered vulgar because it is danced very tightly and erotically. It was not until the 2000s that bachata experienced a real boom in the Hispanic Caribbean countries, from where it conquered the whole world.

Great that you are here! I am Stephan and write here about my passion. With me you can Latin America experience, read and learn to love! I would be happy if you would like to follow me on Facebook, Twitter, Google+ or Pinterest.