How do non-Americans prepare their tea

In this country, Japan is famous for its strict tea ceremony cha-no-yû (literally: hot tea water), or cha-dô or sa-dô (Way of tea). Many Japanese women, especially young women, are still learning the rules of this art. In Japan, however, green tea is above all an everyday drink that is enjoyed with pleasure and drunk a lot on every occasion. In the past, as now, it is offered to guests, and in restaurants it is usually served free of charge.

"Any time is teatime" is what the English say and that also applies to Japan. However, the tea used and the preparation is completely different.

Green tea and black tea are basically the same plants, each only with different qualities and aromas depending on the growing area. Green tea, however, is unfermented, while oulong tea (especially drunk in Taiwan) half and black tea are completely fermented. Fermentation or oxidation occurs when the leaves or the sap come into contact with oxygen, which turns the leaves red-brown to black. For green tea, the freshly picked leaves are briefly steamed over boiling water and then dried with warm air. The green color is retained.

Tea originally comes from China and was probably introduced to Japan as early as the 6th century with Buddhism and the characters. It was first mentioned in Japan in 729 and was therefore widespread in aristocratic circles. At the end of the 12th century, the Buddhist monk Eisai brought seeds with him from China, which are considered the origin of the tea plants grown in Japan today. In the monasteries, tea was used to dispel drowsiness while meditating. At that time the tea was still ground into powder (matcha) and poured with hot water and foamed with a bamboo brush, which is only practiced today at the tea ceremony. This was perfected by Sen-no-Rikyû at the end of the 16th century. There is even a film of the same name about this famous tea master (by Masao IMAFUKU, 1989). At the same time, however, the enjoyment of tea gradually spread among the people.

In the 18th century they also invented sencha, the method of drying the leaves and pouring them on as an infusion. Sencha accounts for 90% of tea consumption in Japan today. That is considered to be even finer gyokuro from a selection of tender young leaf tips, which creates a strongly aromatic, yellow-green infusion. For the bancha on the other hand, coarse, older leaves are used, the infusion becomes more brownish. Hôji-cha consists of heated at high temperatures bancha or. sencha and tastes accordingly lightly roasted. Many people especially like to drink it after a slightly greasy meal such as tempura, i.e. fried vegetables or seafood. It often gets colder in summer mugi-cha drunk, but it is made from grain (mugi) and not made from tea leaves.

In green tea, the tein (caffeine) has a stimulating effect, it first dissolves together with the minerals and vitamins, the tannin, the tannin dissolves especially at high temperatures and then blocks the caffeine in the body. The tannic acid as well as longer steeping times or higher temperatures make the tea calming but also bitter and astringent (astringent).

Green tea can be infused two or three times. The number of possible infusions increases with the quality of the leaf material, but decreases proportionally to the water temperature and steeping time. The hotter the tea is poured or the longer it steeps, the faster its taste potential is exhausted.

Bancha and hôji-cha can pour really hot water, but with one sencha the water should only have a temperature of approx. 70 °. By the way, fine green tea should be infused with "soft" water. If you live in a region where the water is very hard, we recommend using a water filter.

Although everyone in Japan has their own rules and tricks for preparing each type of tea, you can use the following method for a real Japanese tea sencha Try it out once and let the relaxing effect of preparation and enjoyment work on you:

For two people, boil about half a liter of water and fill two tea mugs (tea cups in Japan have no handle and only hold about 100 ml), then pour the water into the teapot (kyûsu, small ceramic jug with built-in stainless steel sieve) to preheat it. Then pour the hot water back into the two cups to preheat them and at the same time cool the water down to approx. 70 °. Then fill the pot with approx. 2 lightly heaped teaspoons of tea. Then pour on the hot water (a separate word in Japanese by the way "yû", and will - like with tea"o-cha"- with the respectful prefix" o "to"o-yû"). Let the first infusion steep for 30-40 seconds, depending on the quality. If you pour a little into the mug you can tell by the color whether the leaves are already giving off flavor. If the tea is not yet green, simply pour it back Then, alternately and in between, pour the jug into the cups as well as possible, so that the tea brew does not continue to work too much.

Caution, the cups are hot, grasp the upper edge with the index finger and thumb of your right hand and support them from below with the flat of your left hand, because the standing ring is not that hot, and by using both hands you show respect for the host, the Cup and the artist who made it, and the tea itself! Tea ceremony in small, done quickly ...!

With the first cup, especially enjoy the aroma! However, without milk, lemon, sugar or honey. If the tea is too bitter for you, you can eat something sweet with it, also in Japan we are happy wagashi (Japanese candy) e.g. yôkan served from sweet bean puree.

For a second infusion, let the hot water cool down again in an extra vessel (in the family you can simply use your own two cups again) and then pour it into the jug. Now a few 10-20 seconds are enough, this 2nd cup tastes best! The third infusion has to brew longer again to elicit enough flavor from the leaves, which are now almost completely open. A 4th infusion can then possibly only be achieved with hotter water.

Over time, the ceramic pots absorb the tea flavor and give it off with the next infusion - the pot acts as a flavor enhancer. Therefore, do not use the same pot for black tea, and do not clean with washing-up liquid, rinsing with hot water is sufficient. As a beginner, however, you should use good and therefore unfortunately a little more expensive tea. The Chinese gunpowder tea, for example, is more for advanced users, as it is not particularly mild.

With a cup of green tea you can wonderfully forget your worries and problems, maintain social contacts, create peace and harmony, invigorate the mind and senses and it is always healthier than black tea or even coffee! 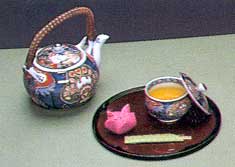 "Will I still be alive tomorrow?
I don't know, of course.

But that I
if i live tomorrow
I'm going to drink tea, I know for sure. "