Who invented the radar?

Radar development in the UK

After the National Socialists came to power in the German Reich in 1933, people in Great Britain began to think about national defense, especially against air strikes, in view of the looming German rearmament. A widespread opinion at the time was that a possibly coming military conflict would be carried out by both sides with massive bombardments, against which the only defense, in the absence of technical interception possibilities, was to hit back just as hard. This doctrine, the so-called Trenchard Doctrine is named after Lord Trenchard, Marshal of the Royal Air Force. The then British Prime Minister Stanley Baldwin formulated the quintessence on 11.11.1932 as follows: "The bomber will always get through".

It was formed in 1934 Committee for the Scientific Survey of Air Defense chaired by Henry Tizard. Various, sometimes absurd methods of air defense are discussed in this context. British physicist Robert Watson-Watt, superintendent of the National Physical Laboratory, among other things, is asked for his opinion, whether he has a "death ray" consider a radio beam weapon that can turn off airplanes in the air as feasible. Watson-Watt rejects this, but instead proposes a warning system on February 12, 1935, which detects approaching enemy aircraft based on a radio signal that they have thrown back. Together with his colleagues, he drafts the memorandum "The Detection of Aircraft by Radio Methods".

Formation of the Radar Group

The radar has to prevail against various other proposals, the critics of the radar refer to the extremely low intensity of the reflected radio signal, which is orders of magnitude smaller than that of the emitted signal. Above all, however, Tizard insists on a test that is successfully carried out on February 26, 1935 near Daventry with a BBC shortwave transmitter and a British bomber. The further development of this technology is decided.

On May 13, 1935, a radar research group began work in the remote town of Orfordness, about 140 km northeast of London on the North Sea coast. The team initially only consists of 4 scientists, Watson-Watt wins the young scientist Edward Bowen as a member of staff. In March 1936 the research group moved into their own country house called Bawdsey Manor a.

The goals are clearly defined: The development of a radar early warning system, later known as the Chain Home System, and the long-term goal of installing radar devices in aircraft, the Airborne Radar.

The first transmitters, according to the state of the art at the time, had an output of around 20kW at a wavelength of 50m, development then concentrated on improvements such as shorter wavelengths, larger antennas, greater transmitter power and the measurement of height and direction of the target. On June 17, 1935, as Bowen, who is involved in the technical implementation and most of the test flights, later reports, succeeds for the first time in receiving a clear radar echo from a flying boat 27 km away. At the beginning of 1936 the maximum range was up to 160km.

Following these successes, radar development is concentrating on the introduction of a chain of radar stations on the English south-east coast. In December 1935 the planning of 5 stations started. It begins on September 24, 1937 Chain Home (CH) Radar system, which initially consists of 5 stations, its service. 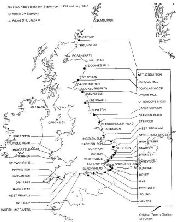 During the 2nd World War it made a decisive contribution during the Battle of Britain in the summer of 1940 where it was the British Royal Air Force Despite technical and above all personal inferiority, the attacking German air force succeeds in repelling. The technology used uses wavelengths of 10-15m, the range is up to 200km.

The project of installing a complete radar device in an airplane was completely new territory when Bowen began. The main problems are the physical limits of the technology at that time with regard to space requirements, weight, line and interference immunity. Bowen sets a maximum weight of around 90kg (200 lbs) and a maximum space requirement of around 1/4 cubic meter (8 cubic feet), and that with at least 500W power. The wavelength was supposed to be around one meter, all in all unrealistic given the state of the art at the time, e.g. the available aircraft only had unusable direct current sources, and it was only in 1938 that powerful alternating current generators became available.

The British researchers are pursuing two main projects under Bowen's direction: ASV (Air to Surface Vessel) with the aim of remote reconnaissance of ships and AI (Air Interception) with the aim of installing a locally operating radar device in interceptors as a supplement to the existing one

Bowen solves the aforementioned space problem with the Airborne Radar by leaving the transmitter on the ground and only using receivers and measuring devices in the aircraft. The advantage was that the transmitter is very powerful, but the position accuracy depends on the angle between the transmitter, aircraft and target. However, Watson-Watt insists on putting a complete radar set in an airplane.

In 1937 Bowen finally got a powerful tube with an output of a few hundred watts and a wavelength of 1.25 m. After a test flight on August 17, 1937, during which no echoes from aircraft, but from ships, are received, the wavelength is corrected to 1.5 meters, which for this technology, that meter-wave Radar, the standard remains.

The complete radar set introduced in December 1939 ASV Mark I. has a range of around 30km (20 miles), 300 devices are installed in the aircraft of the Coastal Command the Royal Air Force built-in. Initially, it is primarily used for navigation purposes, since coastlines could be reliably recognized with the technology used. The detection of large warships was also sufficient; only later in the course of the war in 1940 are aircraft with long-range radar also used to hunt submarines, initially with moderate success. The UK's most successful ASV device, the ASV Mark III, is installed in several thousand aircraft of all types.

The 110 ASV aircraft of the Coastal Command play an important role in the submarine warfare in the Atlantic, as the use of radar has made submarine sightings much more frequent. In addition, could be introduced with the middle of 1942 Leigh Light Searchlights submarines are effectively attacked at night. That changed when the German navy introduced the Metox radio detector that was used before meter-wave Radar-equipped, approaching aircraft could warn early enough.

It turns out that the project Air interception is much more difficult to implement than the ASV. The two additional problems are three-dimensional orientation and the requirement to bring the interceptor within sight before opening fire. At the beginning of 1939 Bowen decided on a solution of two "Azimuth" and "Elevation" Antennas. A cathode ray tube had to be installed as a display for both, so that an additional radar operator was needed in addition to the pilot.

The first test flight with a complete device took place on June 9, 1939, and it was immediately installed in RAF night fighters. It turns out that the system alone cannot get an interceptor close enough to a target that it eventually did Ground Controlled Intercept (GCI) is introduced as a close connection with the Chain Home System.

From 1940 it will be AI Mark I. in night hunters the Royal Air Force used. The new technology initially proves to be partially successful; there are only isolated shootings as a direct result of the use of radar. On the one hand, the training of the pilots in the use of the new radar devices is new territory, and on the other hand, the initial performance is still too imprecise.

The military situation was very critical for Great Britain in 1940. Great Britain is isolated in Europe, especially since the German Wehrmacht is occupying France and the Benelux countries. An invasion of the British Isles is won after Battle Of Britain not to be feared, but the important supplies from the USA, which have not even entered the war, are threatened by German submarines, against which the British meter-waveASV radar is too ineffective. In addition, the German post-bombings against large British cities are increasing in intensity, whereas the AI ​​radar that has just been introduced offers little protection. 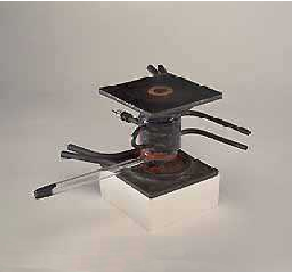 In this situation, John Randall and Harry Boot, two physicists from the University of Birmingham, invent it Cavity magnetron, the cavity magnetron, a promising high-energy oscillator whose potential the British cannot exploit alone.