Image rights: When can I post without getting into trouble? 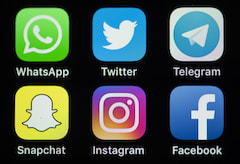 When can a picture be posted on social networks?
picture alliance / Silas Stein / dpa It has never been so easy to take and publish photos. On platforms such as Facebook, Instagram or Twitter, users can display their smartphone snapshots to the global public with just a few clicks. The stupid thing about it: They often violate applicable image rights.

"From a purely legal point of view, violations of image rights are almost the most frequent violations of the law these days, perhaps together with violations of the traffic regulations," says attorney Till Kreutzer. He is co-founder of "iRights.info", a portal that provides information about copyright in the digital world.

What are common mistakes?

When can a picture be posted on social networks?
picture alliance / Silas Stein / dpa The most common legal infringement with pictures on social media is to publish them without consent. "The law says: Every time I take a picture of someone and post the photo on the Internet, I have to ask the person for permission beforehand, and practically nobody does that anymore," says Kreutzer.

In addition to violating this personal right, many images break copyright, explains Stephan Dirks, specialist lawyer for copyright and media law. "This often happens because people believe that what they can find freely on the Internet, they can also save with a right-click and then upload it again somewhere." But this requires the author's permission.

Is it a punishable offense to redistribute posted images?

That depends on how. For example, if you distribute the photo using the share function of the respective platform, you usually have nothing to fear. "There is a case law of the European Court of Justice that in such cases there is usually no independent public access," explains Dirks (ECJ; Az .: C-348-13).

It looks different if you download the photo and then post it yourself. Then the author or other authorized persons no longer have control over it, so you need a license for it.

Are posts only allowed if everyone has been asked beforehand?

No. "If there are hundreds on the picture and no people are clearly highlighted, then you are allowed to do so as an exception," explains Kreutzer. This applies to demos, for example. Every participant should expect to be photographed. In addition, individuals are more difficult to recognize in such photos. "So in principle you don't photograph people, you photograph a crowd."

Are there any special features when it comes to children?

Yes, because first of all it has to be clarified who is actually allowed to give permission. In the case of children under the age of 14, both parents have to do this. This is often the undoing of teachers. "Teachers are constantly breaking all kinds of regulations," says Dirks. They are often satisfied with the permission of a parent and thereby make themselves vulnerable.

It doesn't get any easier from the age of 14: "It then depends on whether the children are able to recognize the implications of this decision," explains Kreutzer. In case of doubt, a judge will decide whether they were able to do so. If you don't want to risk any problems with photos of minors, you should get the consent of both parents if possible. Publishing photos of your own children can also have legal consequences - if the child takes action against it one day.

The right to one's own picture is the personal right of every person to be able to decide whether his picture is reproduced in public or not. Again and again, however, the right to the motive is also mentioned.

Items can be posted without any problems, right? Not quite
(c) dpa "That is more or less a myth," says Kreutzer. Motifs are mostly free in Germany, so it regulates the freedom of panorama. "This is a regulation that says that if you can take pictures of works of art or buildings that may be protected by copyright from normal street space, then you can post and distribute these photos in any form on the Internet," explains Kreutzer. In other countries, however, there are no such regulations. In other countries, it may well be that motives are protected. In Germany, too, museums or churches can prohibit photos inside buildings.

How can you avoid legal violations when posting pictures?

The simplest thing is to only upload photos that you have taken yourself and where everyone photographed has been asked for permission to publish the photo. If you want to be on the safe side, you can also read the general terms and conditions of the social network in which you want to post the picture. At least in terms of image rights, they are quite unmistakable, says Dirks.

Does it make a difference how the photos are distributed?

Yes. Because not all platforms distribute images equally. While Facebook, Instagram or Twitter make them available to a more or less undefined public, pictures with messengers such as Whatsapp or Telegram are sent to one or more people - but the target group is precisely defined. As a rule, this is not viewed as publication or dissemination, says Kreutzer. So no consent is required for this.

How can I proceed against an image?

Most image rights violations happen in the personal environment. The easiest thing to do is to ask the person who posted the picture to delete it.

If that doesn't happen, you can contact the platform: Facebook and Instagram were unable to provide any figures on deletions upon request. However, both platforms offer complaint forms for reporting legal violations.

If you report such a violation, the platform is obliged to investigate. Only if none of this works should you consult a lawyer.