How can you see the Cassiopeia constellation

From the Greco-Roman world of legends

Cassiopeia was a queen, the wife of the Ethiopian king Cepheus. Together they had a beautiful daughter, Andromeda, of whom they were very proud. One day Cassiopeia boasted that her daughter was more beautiful than the Nereids, the daughters of the sea god Nereus. With this she conjured up great disaster, for the Nereids were offended and angry with Cassiopeia. They complained to Poseidon (now Neptune), the ruler of the seas. He got very angry and sent a fire-breathing sea monster to Ethiopia, which devastated the whole country.

Cepheus worriedly asked the oracle what should be done to get rid of the terrible beast. The solution was no less cruel - he should sacrifice his daughter Andromeda to the monster! Check out Andromeda to see how the story went on! As a punishment for her arrogance, Cassiopeia was carried to heaven by Poseidon, but in a strange pose - upside down in a chair.

Sight possible at any time 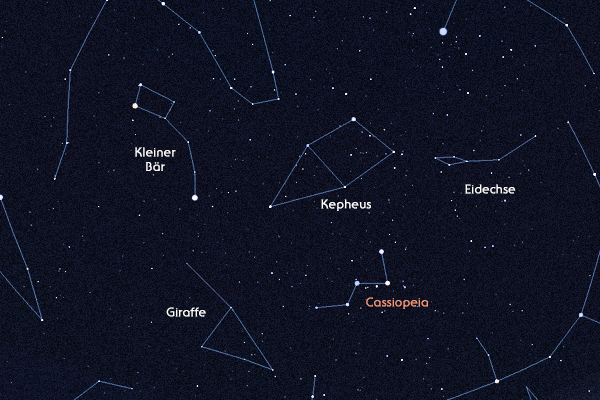 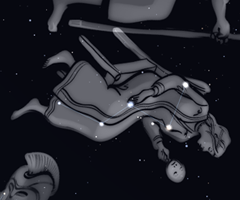 The constellation Cassiopeia (also Kassiopeia) is very noticeable and easy to find. Your five brightest stars form the letter W (or M, depending on how they stand) in the sky. Some also see it as an armchair.

Cassiopeia is a circumpolar constellation. That is, their stars never set. Cassiopeia can always be found somewhere in the sky. Right next to her is her husband Cepheus, whose constellation looks like a house.

In spring it is just above the horizon, in autumn it is high above our heads. It rotates around the pole star, which is at the center of the star's movements. 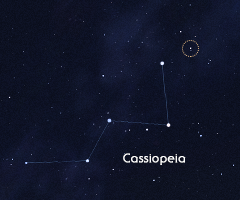 The glittering ribbon of the Milky Way runs right through Cassiopeia. A tightly woven carpet of stars spreads out behind its five bright stars.

A less bright star in the constellation is a candidate for a supernova explosion. Perhaps we will still see it explode and suddenly appear as a bright, bright point in the sky, where previously only an inconspicuous little star flickered.

The position of this star is marked on the right in the illustration. His name is Rho cassiopeia. More on this exciting topic can be found on the page about supernovas.

Where in the sky is Cassiopeia to be found? 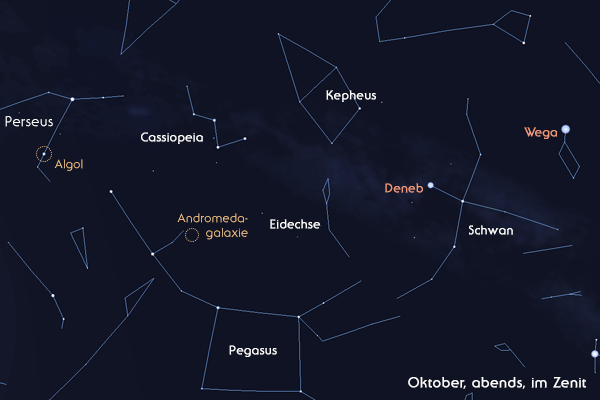 Since Cassiopeia is one of the circumpolar constellations, it never sets, but is always represented in the sky. It is located near the pole star around which the stars revolve.

Cassiopeia is best observed in autumn when it is highest in the sky.

Cassiopeia is easy to spot because it looks like a W. The axis of the Little Dipper (or Little Bear) points in your direction.

The graphics on this page were created with the help of the planetarium software Stellarium. This planetarium for the home PC can be downloaded and used free of charge.