Do you irradiate minerals with a "black light lamp", ie a UV radiation source, as it is e.g. If, for example, you use stamp collectors to check their stamps, your mineral collection suddenly has a completely new look. Calcite crystals glow red to yellow, fluorite blue to violet and aragonite yellow. But uranium minerals also show this effect: they shine yellow to pink-green. If we look closely and have gotten used to the darkness, we observe with some minerals that if we briefly switch the stimulating radiation on and then off again, they even continue to glow for some time. This lighting behavior is so typical that you can precisely determine many minerals through UV radiation.

What is luminescence
In addition to irradiation with UV, there are many more triggers for crystal lights. We summarize all these phenomena under one term: Luminescence. this is the Collective term for all types of lighting up of a substance under the influence of any energy. These can be electromagnetic radiation, radioactive corpuscular radiation, heat, electrical fields or mechanical effects. These forms of energy initially serve to raise electrons to higher energetic states. If the supply of energy ceases, the electrons fall back from the higher states into unoccupied, energetically lower states. The energy difference is called radiant energy D E = h · n submitted; the crystal lights up. Depending on how quickly this happens, we differentiate between two types of emissions: fluorescence and phosphorescence. 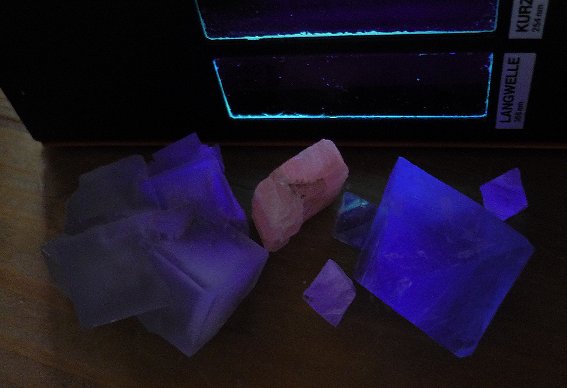 The fluorescence radiation is longer-wave than the primary radiation. Because part of the energy of the primary radiation is used to stimulate vibrations in the crystal lattice and thus ultimately converted into heat. The mineral can therefore invisible radiation z. B. absorb from the UV range and then emit visible light, it fluoresces or glows in the "dark light".
The tooth enamel does the same, by the way. This consists of apatite, a phosphorus mineral that also occurs in inorganic nature: approx2(OH, F) PO4. Artificial teeth usually do not fluoresce. You should know that when you go to a disco. The UV radiation then reveals wonderful tooth gaps ...

phosphorescence
If the substance continues to glow after exposure to the primary radiation, we speak of phosphorescence, named after the long-lasting glow of phosphorus. The latter, however, has nothing to do with the process of excited radiation emission from minerals. While phosphorus is the sustained release of oxidation energy in the form of light (Chemiluminescence; DH = - h n), In irradiated minerals, the electrons are raised to an excited state and from there shifted into an intermediate state, which can be a crystal defect, for example. For this reason, they can only slowly fall back into the basic state. To do this, they have to be raised slightly again. This can be achieved by heating, shock or renewed supply of radiation.

Now to the different forms of luminescence:
Luminescence does not include the glow that is triggered by heating a crystal (glow). This is the well-known behavior of a black body emitter or the result of chemical reactions (slow burn-off of pyrite or coal, for example).
When fluorescence and phosphorescence (as just described) are caused by the absorption of electromagnetic radiation, we speak of Photoluminescence.

If you heat crystals like those of colored fluorspar to about 100 C, you can observe an intense one Thermoluminescence (-> attempt). However, not all crystalline substances show this behavior. The prerequisite is the presence of disruptive factors such as free atoms of calcium and fluorine.

Sometimes when you deform a crystal you observe Triboluminescence. This can be observed with the quartz crystal. But also knocking pebbles, which are made of a-quartz, triggers a clearly visible glow in the dark. This is by no means a spark!
The origins of this glow are emissions due to discharges between opposing fracture surfaces, the secondary radiation excited as a result, and chemiluminescence, which is caused by the regeneration and chemical saturation of the fresh fracture surfaces.

Incidentally, other substances also show this phenomenon, for example grape sugar. If you break dextroenergen tablets in the dark, they will light up blue at the break point. You can also crush rock sugar ("Kluntjes") with tongs. The cohesion of the sugar molecules in crystals is based on hydrogen bonds. As is well known, these are interactions between electrical dipoles. When splitting there are then the light phenomena.

But non-crystalline substances also glow when bonds are broken. We report on this on the website about the glow of glue points when opening envelopes.

Requirement for the luminescence
The luminous phenomena are based on impurities in the crystal due to foreign atoms and defects in the lattice. These are also called "activators". Most of the time it is the activators that are excited to release the electrons. Super pure minerals therefore do not show these phenomena. Activators can e.g. B. be released by exposure to radioactive sodium or calcium ions in fluorspar crystals. Ions and atoms of metals from the group of rare earths (lanthanides) should also be mentioned here.

On this website we report on what happens in the crystals when they are excited to fluorescence, phosphorescence (both known as photoluminescence) and other forms of luminescence.

An addition for connoisseurs
Fluorescence is mostly a singlet transition without a spin reversal, while phosphorescence is a triplet transition with a spin reversal. In contrast to the orbitals of atoms or molecules, in the case of crystals we have to consider the conduction bands in order to understand the emissions.
Not only natural minerals glow. Many laboratory substances such as anthracene or fluorene (name!) Also show this effect. Here, however, the molecular orbitals must be taken into account, since the electronic interaction in such crystal lattices, which are made up of more or less isolated molecules, is extremely small. That is why their solutions also fluoresce. This becomes clear with quinine, which still fluoresces in a dilution of 1: 100000. Adsorbed molecules also fluoresce. This is used to produce optical brighteners with which the "yellow" in white laundry is outshone. They then shine particularly beautifully in the disco basement. Caution: But that is also what those from the mineral apatite Ca do2(OH, F) PO4 existing teeth. If these are missing or wrong, you illuminate your beautiful partners with black tooth gaps or even with a black oral cavity ...

Further texts on the topic of `` Crystals ''