What is the ACLU

The actions of the officials against demonstrators in front of the White House in Washington were illegal, argue the civil rights organization ACLU and other groups as well as individual participants in the protest. During the ordered eviction, tear gas and rubber bullets were used against people who protested peacefully against the violent death of African American George Floyd on Monday, according to the lawsuit published by the ACLU. It was filed in a federal court in the US capital.

In addition to President Donald Trump, Attorney General William Barr and Defense Secretary Mark Esper are also named in the lawsuit. It is said that the demonstrators' fundamental rights, guaranteed in the constitution, were violated with the operation. The American Civil Liberties Union (ACLU) wrote in a tweet that the government must be held accountable.

Attorney General Barr had previously defended the police operation. After security forces forcibly pushed the protesters away from the White House square, Trump went to a nearby church for a photo op and posed for the cameras with a Bible in hand. Barr said, as U.S. President, Trump should be able to walk from the White House to a nearby place of worship. ACLU also announced lawsuits over the use of security forces against journalists during the demonstrations. 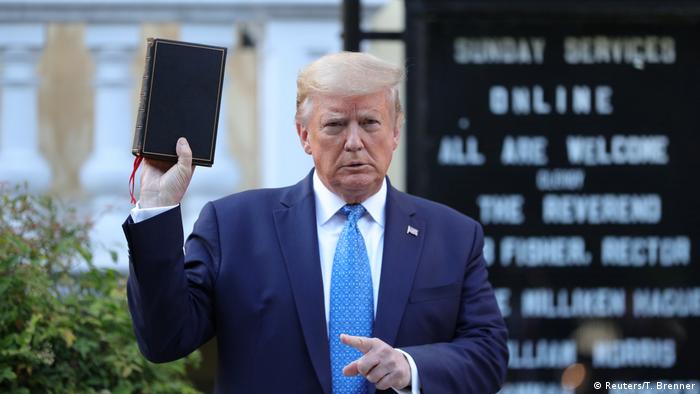 Meanwhile, in Minneapolis Thursday, an emotional memorial service was held to commemorate African American George Floyd, whose death on May 25 in a brutal police operation in the United States sparked horror and outrage and led to nationwide protests against police violence and racism. The ceremony at the Christian University of North Central was attended by relatives, friends, politicians and personalities such as civil rights icon Jesse Jackson. A gold coffin containing Floyd's body was laid out in the room. Floyd family lawyer Ben Crump said the 46-year-old did not die from the coronavirus pandemic. "The other pandemic that we in America are all too familiar with, the pandemic of racism and discrimination, killed George Floyd." 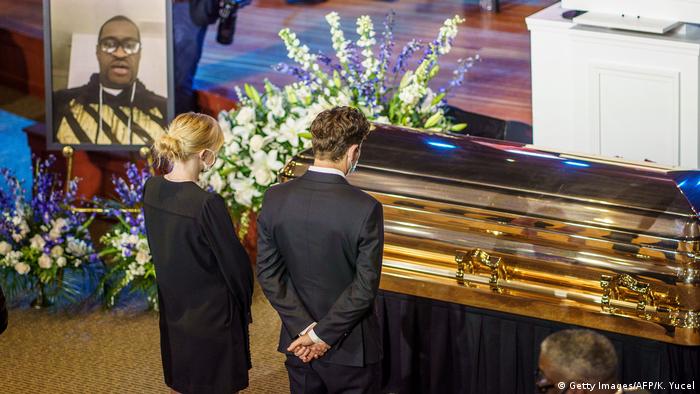 The funeral speech was given by the well-known pastor and civil rights activist Al Sharpton. He said the Floyd case was emblematic of centuries of oppression of blacks in the United States. The whites have always "put their knees on our necks". After Sharpton's speech, the participants in the ceremony paused in silence for exactly eight minutes and 46 seconds - that was how long one of the four police officers involved in the arrest, who had since been released and accused, had pressed his knee into Floyd's neck, thereby removing his breath.

Call for a new "March on Washington"

Sharpton announced a new "March on Washington" in response to Floyd's death. This should take place on August 28, the 57th anniversary of the 1963 rally at which Martin Luther King called for equality between blacks and whites with the legendary words "I have a dream". "We are going back to Washington on August 28th to restore and re-commit to this dream," said the preacher at the memorial service. "We will change the time". Floyd's body is due to be buried next Tuesday in Houston, Texas, where he grew up. Before that, further mourning ceremonies are planned in various cities. 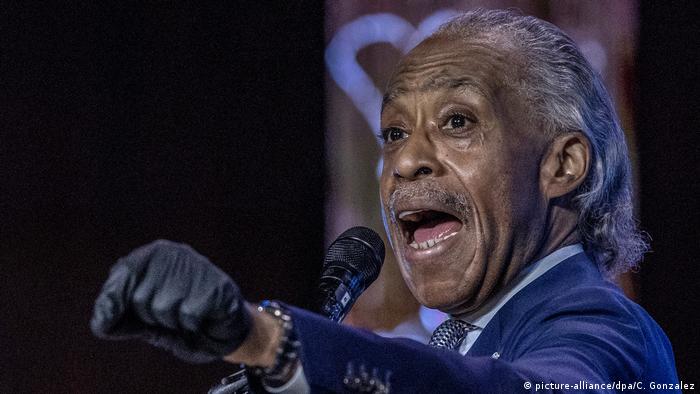 Shortly after the memorial service for the death of the African American, Twitter deactivated a video of US President Trump in his memory. The short message service justified the move with copyright complaints that had been submitted. The video consists of photos and video sequences of protest marches and scenes of violence - highlighted with words from Trump.

Trump: "I've done a lot for the black community"

This commented again on Floyd's death at an appearance in front of the White House. Its killing was unacceptable. Trump called on police across the country to treat all citizens equally - regardless of their skin color. "That is what our constitution requires, and that is what our country is about."

Regarding the surprising decline in the unemployment rate in the US, the president added, "Hopefully George is looking down right now and saying that this is a great thing that is happening in our country." Trump also claimed, "No one has ever done what President Trump did for the black community."

Merkel: Floyd's death is "something terrible"

Like other politicians and celebrities before, Chancellor Angela Merkel also spoke on Thursday evening in the ZDF program "What now?" strongly condemned the fatal police operation and described it as murder. "First of all, this murder of George Floyd is something really, really terrible." Racism is "something terrible - and it does not only exist in the USA.

Regarding Trump's handling of the ongoing protests in the United States, Merkel said: "My demands on politics are always that one tries to bring together and reconcile." Trump's political style is "already a very controversial one".