What's wrong with the Higgs boson

Higgs - in search of the origin of mass 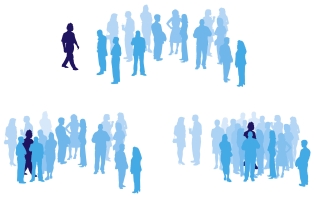 A party! It is teeming with people. A star steps through the door and the party goers pounce on him. He barely manages to cross the room. The party goers represent the Higgs field of the standard model. The star slows down as if it were being given a mass due to its interaction with the Higgs field.

Where does the mass of the elementary particles come from? Particle physicists have been dealing with this question for some time, because mass plays a central role in the universe. It has not yet been clarified exactly by which mechanism the elementary particles that make up matter obtain their mass. The physicists suspect that it is caused by a medium that is present everywhere in the universe and through which everything moves: the Higgs field. A particle belongs to this field - the Higgs particle - which can be detected with the help of particle accelerators such as the LHC. In July 2012, the two large LHC experiments ATLAS and CMS announced that they had discovered a particle that fits the description.

Matter is made up of particles 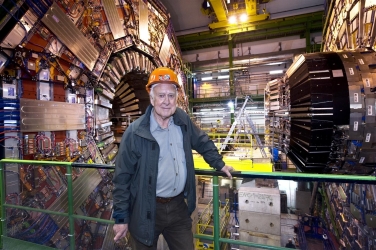 Everything visible - taken in by humans - consists of three different particles: up quarks, down quarks and electrons. All of these particles have a mass. Interestingly, the particle mass is not a primary component of the Standard Model, on the contrary: it is even based on massless particles. But without the mass, all particles would fly apart and nothing would be as we know it.

To explain why everything is as we know it, the theoretical physicist Peter Higgs from Scotland put forward a thesis. According to his theory, the universe is filled with a kind of "quantum syrup", the Higgs field. This quantum syrup slows down the particles flying through it, it practically pulls on them. As a result, they gain mass. The stronger a particle reacts to the Higgs field, the more mass it has and the easier it can in turn set the Higgs field to vibrate. These "eddies in quantum syrup" express themselves physically in the creation of Higgs particles, which have been sought for more than 40 years. Their discovery would prove the existence of the Higgs field.

Relation to the standard model

The standard model of particle physics is extremely successful: since its introduction it has been tested to the utmost in all particle accelerators in the world. The result: It describes the components of matter and their interactions, i.e. the forces that act between them, excellently. However, the theory of particle physics, the Standard Model, is only mathematically consistent with the Higgs particle. 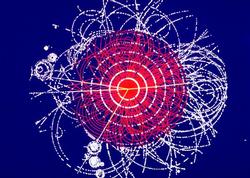 Simulation of a Higgs particle that decays into four muons on the ATLAS detector. Graphics: CERN

On July 4, 2012, scientists at CERN announced the discovery of a new particle at around 126 gigaelectron volts. In the meantime they have been able to confirm that the discovered particle is the Higgs particle predicted in the Standard Model. Now they want to examine its properties in detail.