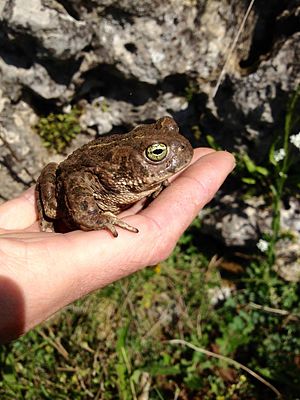 This natterjack toad sits on a human hand.

Toads are amphibians, i.e. vertebrates. Toads, frogs and toads are the three families of the frog auger. Toads are heavier than frogs and have shorter hind legs. Therefore, they cannot jump, but rather sneak forward. Your skin is dry and has noticeable warts. This allows them to secrete a poison to protect themselves from enemies.

There are toads almost all over the world. They are especially missing where it is very cold. Their habitat has to be humid, which is why they love forests and wetlands. But they also feel good in parks and gardens. They are also mostly active at night and at dusk because they avoid the sun.

The most common species in our countries are the common toad, the natterjack toad and the green toad. The midwife toad lives in parts of Spain, in France, in Switzerland, in a small part of Germany, but not in Austria and further to the east.

What do toads eat and what enemies do they have?

Toads feed on worms, snails, spiders, insects and other small animals. That is why they are welcome in the gardens. Despite the poison on their skin, adult toads also have many enemies: cats, martens, hedgehogs, snakes, herons, birds of prey and some other animals like to eat toads. The tadpoles are on the menu of many fish, especially trout, perch and pike.

But toads are also endangered by humans. Many are run over on the streets. Toad tunnels are therefore being built at special locations. Or people build long fences with toad traps, which are buckets buried in the ground. At night the toads fall in there, and the next morning friendly helpers carry them across the street.

How do toads reproduce? 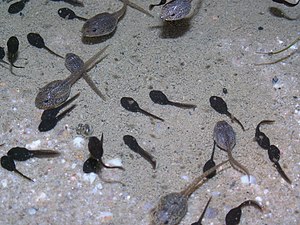 Before mating, the male toads can be heard croaking, similar to the frogs. They show that they are ready to mate. When mating, the smaller male clings to the back of the much thicker female. Most of the time it can be carried into the water like this. There the female releases her eggs. Then the male expels his sperm cells. The fertilization takes place in the water.

Tadpoles develop from the spawn. They have a fat head and a tail. They breathe through gills like fish. They later grow legs while the tail shortens and eventually disappears entirely. Then they go ashore as fully developed toads and breathe through lungs.